Can the Dead Liven Up Your Marketing?

Can the Dead Liven Up Your Marketing? 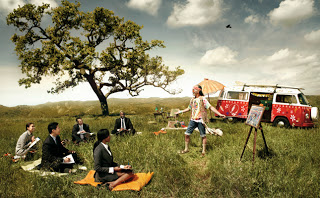 What do the promotional strategies of a rock band have to do with modern business messaging?

Plenty, according to David Meerman Scott and Brian Halligan.

Scott and Halligan are authors of Marketing Lessons from the Grateful Dead: What Every Business Can Learn from the Most Iconic Band in History. From strong brand loyalty to effective direct mail tactics, many of the goals sought by today’s CMO are objectives that the band nailed cold in its own quirky fashion during its three-decade run.

Co-author Scott talked with Deliver® and shared his insights on how the group’s unconventional wisdom and pioneering style can be successfully adapted by today’s businesses.

DELIVER: You’ve written an innovative book that explores the marketing philosophy of the Grateful Dead. Generally speaking, how is the band relevant to direct marketers today?

DAVID MEERMAN SCOTT: The Grateful Dead treated fans with tremendous respect, and my sense, from so many direct mail marketing efforts, is that there is a very one-way relationship between companies and potential customers. If you apply lessons from the Grateful Dead, you will think of different ways to engage your audience.

DELIVER: Which lessons in particular should be applied?

SCOTT: In chapter 10 we talk about putting fans in the front row. Once people have a mailing list, assuming it’s an in-house list of your most loyal supporters, you can figure out who are most loyal and you can ‘put fans in the front row.’ The Grateful Dead had a mailing list in pre-web days and offered the best concert seats to those on the list. Segmenting your list in such a way that your best customers get something special from you is a good idea.

DELIVER: Can you give an example of what would be considered “something special?”

SCOTT: Think of the magazine industry. The typical magazine gives the best price to people who don’t subscribe. If you don’t subscribe, they give you a subscription of $10, but if you renew, it’s $30 a year. The Grateful Dead did the exact opposite. Their best customers got the best seats. That’s treating fans with respect.

Another thing the band did is free up content. They allowed fans to make audio recordings of their concerts. While other bands said no, the Grateful Dead welcomed it.

DELIVER: From a direct marketing standpoint, what can companies offer?

SCOTT: Create a video series, an e-book or something similar. Rather than send direct mail containing a product, how about direct mail that alerts people to something interesting on the web that they can have for free? The purpose is not to sell something immediately, but instead, to develop someone who is a fan of your company into a customer who will buy much more later. I’m suggesting that people create content on the web and use direct mail to talk about and promote it; offline driving to online.

DELIVER: In your book, you stressed that the Grateful Dead tended to rely on concerts rather than record sales. Was this part of their unique approach?

SCOTT: The Grateful Dead provided fans with such a great experience that people wanted to come back many more times. It was a partnership, having fans come to 20 or 30 shows over a lifetime. Instead of doing $9 records, they were generating a following.

DELIVER: How does a company go about creating such a unique business model?

DELIVER: You also discuss the fact that the band allowed fans to use their logos on T-shirts and other paraphernalia. How did they manage that?

SCOTT: The Grateful Dead had an iconic logo — the band’s logo was among the top most recognized logos in the world. People were making T-shirts and selling them in the parking lot. The band said, “That’s OK, but you need to license it properly.” Rather than cracking down, they said, “Thanks a lot, but do it legally, and here’s how you can do it.” What they essentially did was partner with their fans.

DELIVER: In your book, you emphasize the Grateful Dead’s memorable name. Do you suggest that the more unusual a brand’s name, the better?

SCOTT: Yes. Consider what everyone in your industry believes is the right thing, and then decide that maybe the complete opposite is the right thing. When the Grateful Dead started in 1965, there was a wide range of different types of bands — blues, jazz, classical, country. They were none of those and all of those. So they created a new category, a jam band. That can be true of any company. If you look at the landscape of competition, maybe you can create something new.

DELIVER: How can marketers best take advantage of these secrets?

SCOTT: Be yourself. That’s the last chapter of the book. Be who you are and have fun. If you don’t love what you do, it’s going to show in the results. If you truly do love it and create interesting messages that work well, use that to your advantage and enjoy the process of communicating that to people.

DELIVER: Does anything else set the band apart from its peers?

SCOTT: They believed in giving back to the community. Some businesses might superficially give back by donating to the community, but the Grateful Dead raised $10 million by giving benefit concerts and creating a foundation.

DELIVER: Do you recommend that a company promote its charitable endeavors?

SCOTT: If it’s a straight donation, no. But if you do something that’s beneficial to the community, it’s OK to talk about it, to show the community what you’ve done. For instance, there’s the Ronald McDonald House. McDonald’s has funded these places and they are all over the world. In a case like that, it’s fine to point out the fact that you’re doing this and helping the community. But if you just cut a check for $10,000 and jump up and down talking about it, and then send out direct mail about it, I think that’s ridiculous.

DELIVER: What do you think about the direction that direct marketing channels are taking today?

SCOTT: Direct marketing, from my perspective, has always been focused on what’s in it for me or for the company. We want to sell you something. We want you to buy something or subscribe. It’s always been one way. What the band did was create true partnerships with fans. I’d like to see even more direct marketers figure out how to not just sell products, but also truly partner with the people they are trying to target.

David Meerman Scott is the co-author of Marketing Lessons from the Grateful Dead: What Every Business Can Learn from the Most Iconic Band in History; © 2010 by David Meerman Scott and Brian Halligan. The book is available at all bookstores and online booksellers.

Crittendon, Denise (2011, March 2). Can the Dead Liven Up Your Marketing?. Deliver. Retrieved from http://www.delivermagazine.com/2011/05/can-the-dead-liven-up-your-marketing/

Tips for Hiring the Right Employee